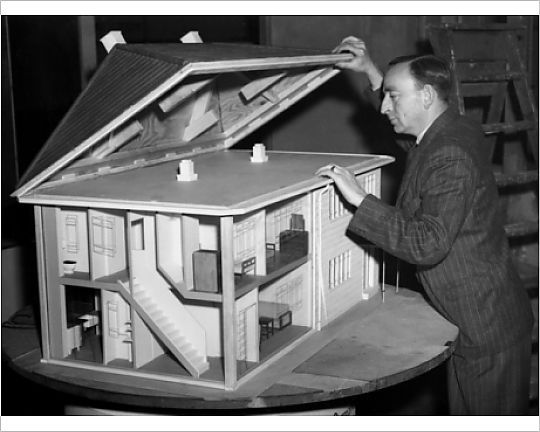 The 20th Century Society recently spent the weekend in Leeds and for me one of the great finds was a complete estate of mostly unaltered Airey houses in Oulton.

Designed and built after the Second World War by Sir Edwin Airey of Leeds, these prefabricated houses consist of concrete columns, reinforced with metal tubing, recycled it is said from military vehicles. A series of shiplap style concrete panels form the distinctive exterior. Manufactured off site, they could be erected quickly with relatively unskilled labour as a way to ease the post war housing shortage and unlike more usual ‘prefabs’, were expected to be permanent.

In total some 20,000 were built by local authorities, but these at Oulton were provided by the National Coal Board for local miners and their families. When government policy towards the nationalised industries changed, the NCB began a massive programme of house disposal, often to sitting tenants with Building Society mortgages provided. Unfortunately, due to the non-traditional form of construction and fears regarding internal steel degradation, mortgages and insurance were difficult if not impossible to obtain, resulting in the whole estate being purchased by a succession of property companies.

The Oulton estate is particularly noteworthy because, unlike many other Airey homes, none have been re-skinned or reclad as a means of addressing the perceived structural problems and lack of insulation. Of the original 214 constructed, 70 remain externally looking much as when originally built in a pleasant rural location, all with generous gardens and many with pleasant views. There are still some of the original mining tenants and it appears to be a settled and quiet community, albeit in need of some refurbishment and environmental improvement. 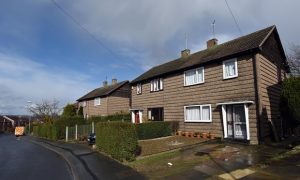 Being largely unaltered, expert opinion is that these are now relatively rare examples, but sadly are currently under threat of redevelopment by the present owner. The 20th Century Society is campaigning for their retention and refurbishment:-

Learn more about the campaign to save Airey homes by visiting https://saveourhomesls26.org/

This message is only visible to admins.

Error: An access token is required to request this resource.
Type: OAuthException

Yesterday we had an excellent tour around the new

Has got to be one of the most impressive gateways

Go on Spring, you can do it! #DagmarWood this morn

How about this for some urban history on your door

South side of #BoarLane #Leeds with great examples

The Grade I listed #TempleMills has been put on sa

Loved the #queensofindustry exhibition on at the

Great things about #Leeds no.1 - getting away from