Should HS2 be cancelled?

The government is conducting a review of the HS2 high speed rail project to connect Leeds and Manchester to London via Birmingham following concerns that costs may have risen to £100 billion; by the time you read this the outcome may be known!  The following are my personal thoughts on the issues based on my involvement with transport since I joined the planning committee (including attending the national high speed rail conference in June last year).

Many countries are now constructing high speed rail lines.  Spain is an interesting example.   An ambitious plan was developed in 2005 to construct a network of high speed lines connecting all the provincial capitals to Madrid in a maximum of 4 hours and Barcelona within 6.5 hours (most journey times will be much less than this).  Spain is a large country but this has the potential to replace almost all internal flights as well as enabling a large modal shift from car to rail powered by electricity potentially generated from renewable sources.  All the key lines are expected to be in service by 2025 with services operating through Madrid from northern to southern Spain with connections to Madrid Barajas airport.  There has been criticism that this isn’t a good use of money with the likely number of passengers not justifying the cost.  However with the focus on climate change perhaps Spain has actually got things right? 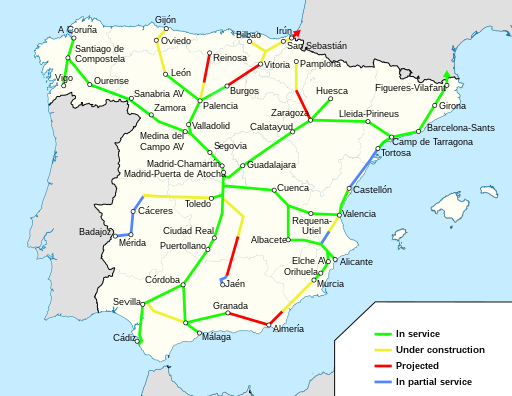 In the UK, HS2 was originally conceived as a means of providing improved links from the major cities of northern England to London.  The London-based people developing the scheme were aware of the existence of Birmingham as a major destination and so also envisaged HS2 services connecting it to northern cities.  However there was no consideration of the need for improved links between northern cities themselves.  Then along came the Northern Powerhouse Rail (NPR) with the admirable vision of connecting Leeds, Manchester and Sheffield with frequent services (6 per hour) in 30 minutes.  However this was initially conceived as a separate project.  Over time political leaders and organisations in the north have achieved some success in getting links between HS2 and NPR rail bolted on.

However the current proposals do have drawbacks.  Sheffield seems to have had a raw deal from both the current HS2 proposals and NPR plans with the HS2 line bypassing the city (connection being by a loop to the existing line – will this be able to cope with the additional trains?).  The NPR line from Leeds to Sheffield would be part on HS2 and part on an upgraded existing line.  Sheffield to Manchester would be by upgrading the existing line with journey times extended to 40 mins.  Passengers from Leeds to central Nottingham will have to change from HS2 to a local train or tram at a parkway station.  There are no plans for how people would get from Leeds to Leicester.   Journey times from Leeds to Birmingham via HS2 would be 49 mins but would be considerably longer if trains take the loop to stop at Sheffield.  To get from Leeds to Bristol and Cardiff passengers would need to change at Old Oak Common in London. There is strong political pressure for NPR to go from Leeds via Bradford to Manchester, but how would it cross the Pennines between beyond Bradford?  Route proposals have yet to be published.

The benefits of HS2 links to London may have been overstated.  HS2 will call at a new station in west London (Old Oak Common) before terminating at Euston.  However Kings Cross probably has the best onward connections of any London terminus with several underground lines converging there, Thameslink rail services to Gatwick airport, services to Kent and the Eurostar terminal.  It is also closer to the City of London and Docklands.  Therefore many passengers from Leeds (and Nottingham) may prefer to use the existing services. It may be questioned why costs of developing and constructing High Speed Rail in the UK are so much higher than in other European countries – the 188 mile high speed line in France between Tours and Bordeaux which opened in 2017 cost around £8 billion.   Perhaps there are things we can learn in order to make costs more manageable?

Despite this high speed rail is a concept whose time has come and has the potential to provide a means for people to move around the country with less reliance on cars and to replace short haul flights which are unsustainable in an era of climate change.  If, as seems inevitable, there is delay to HS2 reaching Leeds, perhaps this time could be used to be used to develop a more joined up long term vision for high speed rail in the UK (as per the Spanish example).  This should incorporate links between all the major cities (such as Leeds) in the UK including to Scotland, Bristol, Cardiff (and perhaps a tunnel to Ireland).  It should also revisit the need for through services to the Channel Tunnel and a link to Heathrow airport.  Long term one high speed line from London to the northern UK is likely to be insufficient.

Our postal address is: